Is Typing Out Notes More Effective Than Writing Them Out?

At some point in school, college, or work, we’ve all debated about the best note-taking methods. While this wasn’t even a question or concern in the past, technology has profoundly changed the way we learn and work today. There’s a lot of debate and research on which note-taking methods generate the best results in terms of productivity, learning, and ability to recall information.

During my first semester of college, I switched to typed notes, and personally, I found it very useful. It was nice not having to take out a new paper whenever I needed more room to write. Plus, it was easier to organize my notes online with folders and tabs.

It was a constant struggle to find a place to store handwritten notes. After the test or semester was done, I just tossed those notes to the side. As a result, those handwritten notes created a lot of clutter in my physical folders and space in my room. I’ve heard that writing out notes is better than typing them out, but I couldn’t relate to that statement.

Everyone’s brain functions differently and they have their preferred note-taking methods. In my case, it didn’t matter which method I was using because I got stressed out anyways.

Whenever I took notes (writing or typing), I always felt pressured to take in as much as possible because the professors went over so much information in a short amount of time and the presentation slides went by fast. Experts say that writing out notes helps you remember the information better, but whenever I wrote out notes, I just wrote as fast as I could to get it over with.

I know it’s tiring to hear about how technology has changed our lives, but it really has. Not just our personal lives, but also our work and school lives. Nowadays, especially with online learning, it’s almost necessary to access the internet.

Going back to note-taking methods, writing out notes isn’t so popular anymore. Instead, students have switched to typing out their notes on their laptops or writing on their iPads with a special pen made just for that product. The latter is another story.

What’s the problem, though? Schools are just trying to keep up with the modern times, so that they don’t get left in the dust. Ever since laptops came into the picture, educators and researchers have debated whether or not typing out notes is more effective than writing them out.

What is the difference between typed notes and handwritten notes? A lot of things, actually. Stay tuned to read about the differences between the two methods, and hopefully, they’ll help you decide which is the best note-taking method for you!

Fun Facts About the Impact of Technology in the Education World

Before we get into the nitty-gritty details about both methods, here are a few statistics from Research.com that go over the impact technology has had in our society so far!

Especially now during the pandemic, school will be challenging if you don’t have a laptop (or some sort of computer). More and more schools are incorporating technology in their classrooms because it makes things easier. Students can access their homework assignments online, pull up their class lectures online, participate in online learning games like Kahoot!, and take notes online.

Pros and Cons of Handwritten Notes

Some say that writing out your notes is the best note-taking method. But it’s also the easiest way to take notes because it doesn’t require much. You just need lined paper and something to write with. You’ll save a lot of money using this method versus typing out your notes.

Writing out your notes isn’t nearly as fast as typing them out, but it comes with an advantage. Because writers can’t write everything down, they take the time to comprehend the information given to them and then, they can paraphrase it into their own words.

Clearvue Health summarized a study done by Princeton University, which discovered that those who typed out their notes spent more time copying the sentences word for word and less time thinking about the information given to them. Therefore, it negatively affected their performance on the exams.

As mentioned before, what I don’t like about handwritten notes is the mess it creates. Over time, the papers can pile up and create loads of clutter in your house. If you’re good at organizing things, then this shouldn’t be a problem. But not everyone is spick and span and good at taking care of their stuff.

Handwritten notes are also harder to edit. The more you erase, cross out, and rewrite, your notes can look very messy and indecipherable over time. Typed notes have a slight advantage over handwritten notes in this category.

The Pros and Cons of Typed Notes

The difference between typed notes and handwritten notes starts with the number of notes taken. Typing is the fastest way to take notes, and those who type can jot down way more notes than the average writer. Therefore, you have more notes to study when you get home.

Typed notes are easier to manage because they’re all on your laptop; that’s what I love about typed notes. You don’t have to worry about papers piling up and finding places to store them. Instead, you can organize them in folders on Microsoft Word or Google Drive, whichever method works for you.

Another benefit to typed notes is that they’re easier to edit, according to e-student.org. After class is done, typers can move around, edit, and delete sentences, bold or highlight some key facts, and even color-code their notes. Unlike handwritten notes, there’s no erasing and crossing out when it comes to online notes, meaning they’re much easier to read.

Taking notes fast is quite impressive, but unfortunately, it can cause detrimental effects for the individual. While writers take the time to absorb the information that was just given and draw their own conclusions, typers focus more on getting the notes exactly right, word for word. In other words, those that type their notes aren’t paying attention to what they write.

Another downside to typing out your notes is that you can easily get distracted. While sitting through a boring lecture, it’s hard to resist the urge to check your emails, go through Instagram, or message your friend from another class. With your laptop right in front of you, it’s a disaster waiting to happen!

So, What’s The Best Note-Taking Method?

The best note-taking method really depends on the person and their study habits. Say someone wrote out all of their notes for a history exam, but they never studied for it. Unless that person is brilliant and doesn’t need to study until the last minute, it’s highly unlikely that they got a good grade on the history exam.

I relied on typed notes throughout most of my college experience and passed all of my exams, but that’s because I made time every day to study my notes. Again, it all depends on the person. Some may think that writing out notes is better than typing them out, while others may think vice versa.

To wrap it all up, there’s no such thing as the best note-taking method! You can read about the different traditional note-taking techniques and tips on typing out notes effectively, but they won’t matter unless you put in the time to study for the test. 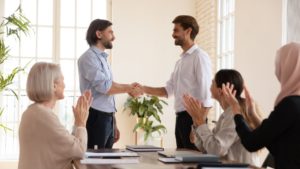